Jim Fitzgerald was happiest when he was on the bandstand playing for an appreciative audience. Speaking of that special connection between musician and listener, he once said, “One of the best things about performing in a jazz band is playing for appreciative, knowledgeable people.

“When the set starts, your eyes are scanning the crowd, fliting back and forth, looking for that expression among members of the audience that says, ‘We’re connecting.’ When my eyes find that expression, that smile, that mutual unspoken feeling of being on the same wave length, it’s magic.”

Jim Fitzgerald, who passed away just a year ago this month, one day short of his 86th birthday, spent over 60 years doing what he loved: playing music. His Sorta/Kinda Dixieland Jazz Band was one of the most popular draws during the heyday of classic jazz festivals, playing as many as 10 annually between 1993 and 2005. The group also had the distinction of being the longest-running lounge act in Las Vegas.

Every weekday afternoon for 18 years, the band took the stage at the East Lounge of the Gold Coast Hotel & Casino on Flamingo Road, just off the Strip, for five hours of “singing and swinging” that included a potpourri of four-part harmony (a la The Four Freshmen), Dixieland, Chicago-style swing, Tin Pan Alley melodies and country-western tunes, plus a touch of comedy.

While the personnel would change over the years, Fitzgerald and bassist Ty Lemley were the constants. But it was Big Jim who gave the band its personality with his Falstaffian appearance and down-to-earth demeanor that exuded exuberance. Jim was uncanny in his ability to “read the house,” and the enthusiasm and good humor of the musicians gave the audience a feeling of being part of an “in” group.

He’s was quoted as saying, “We play what we play. This is what we do for a living, and we like it. It’s a job that has never become a grind. We may appear to be a pretty loose band, but we’re not as loose as we look. Fans come back like a casino player returning to a favorite dealer. It’s amazing to see how people respond when they are entertained.”

Growing up in Mason City, Iowa, also the birthplace of Meredith Wilson of Music Man fame, Jim Fitzgerald’s musical career began in the basement of the family home where his father (a school teacher and band director who played the banjo) organized a group of neighborhood kids as the Basement 5. Jim initially wanted to play the trumpet, but his dad sold him on the idea that there was a bigger need for trombone players.

The youthful band’s big moment was when it performed for a March of Dimes radiothon. When he was 12, Jim was offered a job with a local band that paid $10. “I gave the 10 bucks to a friend who got me in the musicians’ union. I found out later I wasn’t allowed to join until I was 16,” he recalled. “When I was in high school, I was in the school band and also played football. At halftime, I was on the field marching through parade formations in full football gear and then grabbed my helmet and got back in the game.”

The summer after graduating from high school in 1952, he was a member of the Mason City Municipal Band doing park concerts when he received a call that the Clyde McCoy Orchestra needed a trombone player. So rather than head off to college, he went on the road at $110 a week with the McCoy band, whose theme song was “Sugar Blues,” a tune that ultimately sold over 14 million copies.

In the following years, Jim found work with swinging bands led by Ralph Marterie, Hal McIntyre, Woody Herman and Stan Kenton; earned his bachelor’s and master’s degree in secondary education, and taught briefly in Colorado. In 1960, he reunited with Clyde McCoy in a small Dixieland group and then joined Kaye Stephens’ Trio Plus Two as a bass player at the Riviera Hotel in Las Vegas. 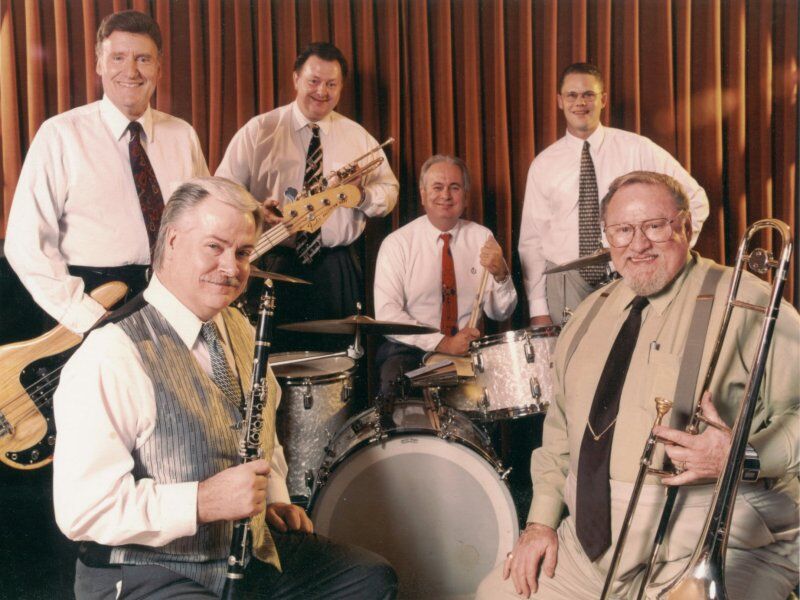 What was supposed to be a two-week gig turned into a 50-year career, with Jim initially playing in lounges and casinos up and down The Strip along with being in show bands backing up such legends as Streisand and Sinatra at The Sands before going to work for hotelier Michael Gaughan in the early 1970s. Gaughan decided to put a Dixieland band in his Royal Inn Casino on Sunday afternoons, and the band packed the place. As Gaughan acquired new properties, the band moved from the Royal Inn to the Barbary Coast and eventually the Gold Coast Casino as the Sorta Dixie Jazz B and.

Originally a cooperative where each member received equal pay, the band was renamed the Kinda Dixie Jazz Band when Jim assumed sole ownership in 1997. On occasion, Jim would don a white jacket and make like Paul Whiteman in leading the Gold Coast Big Band Orchestra for evening dances.

Over the years, the band attracted musicians with impressive backgrounds. Lemley had been musical director for Bobby Vinton and played in bands led by Guy Lombardo, Sammy Kaye, Freddy Martin and Wayne King. Clarinetist George “Moose” Mosse worked with Ted Weems, Charlie Barnet, and Larry Elgart along with a number of other popular groups from the Big Band era. Pianist George Pollack had backed the likes of Eartha Kitt, June Christy, and Shirley Bassey. Stan Mark was principal trumpet for the Maynard Ferguson Orchestra for nine years.

But in early 2005, the longest-running lounge act in Las Vegas came to an abrupt end, 30 days shy of 18 years performing at the Gold Coast. “It was management decision to try something different,” Jim sadly lamented. Some of the younger members of the band also decided to go in a different direction with a different trombone player as the Las Vegas Classic Jazz Band (which has since disbanded). Jim tried to be philosophical, but it wasn’t easy.

“I have had steady work for almost 30 years. I raised my family, sent my boys through college. I’ve never really been out of work for any length of time. When something happens, you adjust. It’s one of the realities of life. Nothing lasts forever.”

Jim had a long history of dealing with diabetes. In 2010, his medication acted up, and he landed in the hospital. He shed 110 pounds, and his weight stabilized at 250. “I’ve lost my chops, so I no longer play the trombone,” he reported. “I do get to play the bass once a week with a rehearsal band. Life is beautiful, and now I have time to enjoy it.”

At the time of Jim’s passing, son Michael paid appropriate tribute to his dad, writing, “Generosity and showmanship were his defining attributes. Those who knew him would tell you that Jim had the biggest heart and was the biggest showman, happiest when he was on stage—and the world was his stage. Throughout his life, Jim’s home (and wallet) was open to those in need. He liked to tinker and fix things, but children held a special place in his heart. Between gigs, he worked as a State Juvenile Parole/Probation Officer, served as a counselor at Child Haven, coached Pop Warner-youth football, taught Sunday school, and spent his free time badgering his children about proper grammar and enunciation—though his rants typically fell on deaf ears.”