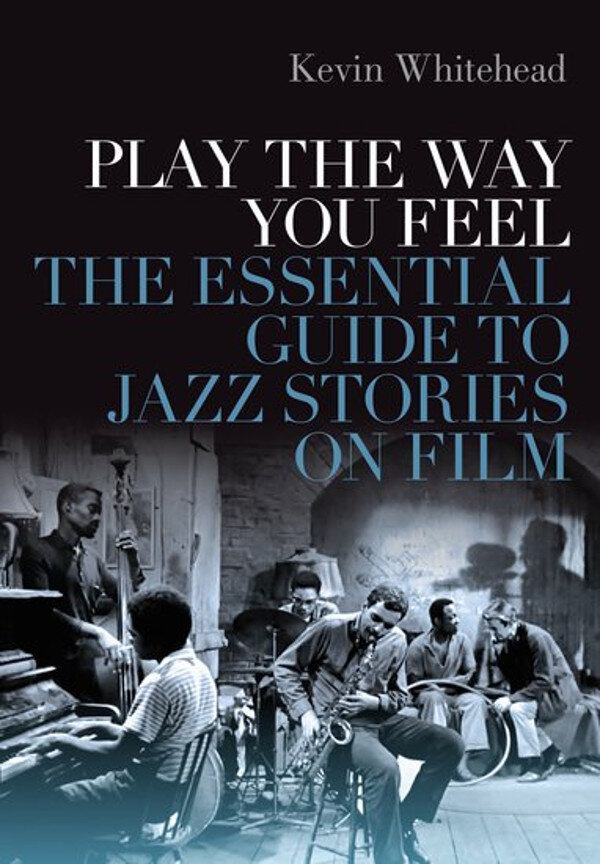 –The 1947 film New Orleans altered jazz history by inspiring Louis Armstrong to form his small-group All-Stars, a format he maintained for the rest of his life.

–The Gene Krupa Story was the most sexually frank of all the 1950s jazz biopics, but viewers never hear about the drummer’s African-American inspirations, Baby Dodds and Chick Webb.

Those are just three of thousands of fascinating tidbits found in a new book by Maryland-based jazz scholar Kevin Whitehead.

Play the Way You Feel: The Essential Guide to Jazz Stories on Film addresses this central question: How do movies tell stories about jazz and jazz musicians?

“Not just what they get right, or wrong,” Whitehead writes in the introduction, “but how they tell it: jazzy, or not? And if so, how is that jazziness conveyed? Play the Way You Feel is partly about jazz movies as a narrative tradition with recurring plot points and story tropes, and we will trace their spread not just through the best-known films that deal with jazz—the likes of Young Man with a Horn, Lady Sings the Blues, or La La Land—but also overlooked and low-budget features and TV movies.”

Indeed, Whitehead gets behind the scenes of famous films such as The Glenn Miller Story, New York, New York, and ’Round Midnight, but he also expounds on lesser-known flicks like Sweet Love, Bitter (1967) in which comedian Dick Gregory portrays a Charlie Parker-type. And The Legend of 1900 (1998), an Italian-made film climaxing in an incendiary piano duel on board an ocean liner. And Low Down (2014) starring John Hawkes as junkie keyboardist Joe Albany.

“The weird thing about that one is that in the movie he’s dating Cicely Tyson before she and Miles Davis got together,” Whitehead told Jazz Times last year. “It’s interesting to see the way that jazz myths get made into Hollywood myths. And how troubling historical angles are glossed over and real events are transformed into fantasies about what happened.”

Luckily for readers, Whitehead possesses a rare ability to appreciate and—more importantly—to clearly explain the intricacies of this music and the idiosyncrasies of its varied practitioners. Refusing to sugarcoat controversy, he confronts many film inaccuracies with a critical eye, boldly acknowledging the historic precedent of white artists and directors stealing the work of black musicians.

The book’s title, Play the Way You Feel, refers to a recurrent jazz-film theme in which its protagonist struggles to overcome authority figures and other malevolent forces which stand in the way of his free and full artistic expression. That’s the story of The Jazz Singer with Al Jolson as Jakie Rabinowitz torn between his father’s traditional synagogue songs and the hot jazz sweeping the nation.

While repeatedly asserting that Jolson was more a vaudeville entertainer than a jazzman, Whitehead enthusiastically applauds one of the film’s sound sequences, “Toot Toot Tootsie.”

“Little as it’s noted,” the author writes, “The Jazz Singer does in fact boast one of the movies’ earliest jazz solos and some (verbal) improvising. Besides singing and dancing, Jolson did an astonishing whistling bit, demonstrated on ‘Toot Toot Tootsie,” a virtuoso set piece. Using fingers to help manipulate the airstream, he trills and rips like a bird, with piercing tone, and throws in slippery glissandi all his own, even as he paraphrases the melody and chooses pitches that follow the chords. It’s a routine, but a real jazz solo just the same.”

That same theme of threatened expression, Whitehead observes, plays out for Forest Whitaker’s Charlie Parker in Clint Eastwood’s Bird, Denzel Washington’s trumpeter in Spike Lee’s Mo’ Better Blues, Sean Penn’s eccentric guitarist in Woody Allen’s Sweet and Lowdown, and Jeff Bridges’ pianist in Steve Kloves’s The Fabulous Baker Boys, among others. Play the Way You Feel is, in itself, plenty entertaining as readers will compare and contrast the author’s descriptions to their own recollections of the films, and they’ll also be thrilled to learn about several jazz-screen rarities.

One such rarity is a 1961 episode of the CBS-TV weekly hour-long drama Route 66 starring aging vocalist Ethel Waters, who had scored big hits with “I’m Coming, Virginia” in 1926 and “Am I Blue” in 1929.

The plot of the Route 66 episode has an ailing Waters asking the show’s young heroes—Martin Milner as Tod and George Maharis as Buz—to help her reunite her old band, the Memphis Naturals. When the personnel is located, the characters are played by jazz giants Coleman Hawkins, Roy Eldridge, and Jo Jones along with veteran ebony character actor Juano Hernandez, who, we learn, appears in several jazz biopics. Whitehead calls the episode “musically semi-coherent,” but Ethel Waters was nominated for an Emmy for her well-played guest shot.

John Cassavetes is one of the book’s high points. The author declares Cassavetes’ short-lived NBC-TV drama, Johnny Staccato, was “the high-water mark for the jazz musician as TV character,” and he explores in detail the director’s indie oeuvre.

Cassavetes made several daring contributions to the jazz-film genre. Heavily improvisational, Shadows, Whitehead writes, “reinforced period links between that music and other modern or avant-garde art forms. Jazz musicians improvised behind poets, live and on record; painters painted to jazz records and maybe played a little themselves, like amateur saxophonist Larry Rivers. In the new decade, scrappy improvisational music fit scrappy independent filmmaking. One sign of how such films broke the jazz-movie mold: suddenly more black musicians are represented on screen.”

Jazz and movies, Whitehead notes, both came of age in the 1920s and ’30s. And thanks to Prohibition, so too did organized crime. Countless American entertainers have had mob ties including jazzmen Jimmy Durante, Earl Hines, Louis Armstrong, and Tony Bennett. So it’s no surprise that several movies here explore the influence of gangsters, films such as Pete Kelly’s Blues, The Cotton Club, Kansas City, and, of course, Cassavetes’ hard-boiled screenplays such as The Killing of a Chinese Bookie.

Play the Way You Feel is Whitehead’s third book, fourth if you count a 2011 collaboration with Dutch photographer Ton Mijs chronicling the Instant Composers Pool Orchestra, an independent improvised music label in Amsterdam. Whitehead has a special affinity for the Netherlands jazz scene which was the subject of his first book, New Dutch Swing, in 1998. The author’s next effort enjoyed a wider appeal. Why Jazz: A Concise Guide hit the bookshelves in 2010 with a reader-friendly question-and-answer format in which the writer to provided pithy definitions of terms such as syncopation and the flatted fifth while sharing his views on the giants of jazz and their most memorable recordings.

To research Play the Way You Feel, Whitehead haunted the Institute of Jazz Studies at Rutgers-Newark as well as at Baltimore County Public Library at Cockeysville and the Enoch Pratt Free Library. The book’s bibliography runs eight full pages.

The depth of his research pays dividends by answering arcane questions such as: what did it cost to rent a grand piano in Seattle in 1989? Including delivery, $175. That obscure factoid illuminates the author’s contention that the premise of The Fabulous Baker Boys stands on a financially flimsy foundation.

Similarly, Whitehead has a good grasp of jazz geography qualifying him to identify the location of actual jazz landmarks, i.e. Birdland, or The Cotton Club, often misplaced on movie sets. In his discussion of Bob Altman’s 1996 opus Kansas City, Whitehead reports that the flick’a main musical setting, the Hey Hey Club, is a fictional stand-in for real-life KC hotspots the Sunset Café, the Reno Club, and the Cherry Blossom.

–Billie Holiday did not witness a lynching and did not write the song “Strange Fruit” as suggested by Lady Sings the Blues.

–Miles Davis played a Martin Committee trumpet, not the Monette seen in Miles Ahead.

But he’s still miffed about Miles’s instrument. “In these flashback scenes, he’s playing a modern Monette trumpet, with streamlined tubing. Much as this book sweats jazz historical details, we haven’t fretted over anachronistic microphones or incorrect saxophone models. But such details matter where an iconic, much-photographed figure is concerned, like Miles with his Martin Committee trumpet and its rounder curves. His playing the wrong horn is like a movie-Hendrix playing a hollow-body at Woodstock.”

The book’s final chapter, “Movies within Movies and New Orleans Comes Back, 2008-2019” covers films such as Miles Ahead, Nina, Bessie, Bolden, and Born to be Blue—starring Ethan Hawke as the drug-addled Oklahoma-born trumpeter Chet Baker. Whitehead welcomes these 21st century biopics as generally well-made and faithful to the artists and their music.

He again pays a visit to the small screen, in this case HBO’s Treme, which ran for four seasons from 2010 to 2013. The Peabody Award-winning dramatic series is set in New Orleans following Hurricane Katrina. Whitehead wisely focuses specifically on the jazz storylines of trombonist Antoine Baptiste played by Wendell Pierce and the father-son struggle between trumpeter Delmond Lambreaux (Bob Brown) and his dad, Albert Lambreaux (Clarke Peters), chief of a dissolute tribe of Mardi Gras Indians.

While most of us will read this book cover to cover, others will use it as a reference tool. Its index, thanks surely to editor Suzanne Ryan, is thorough and accurate. Speaking of the editor, the book is remarkably free of errors—misspellings of the surnames of bandleader Joe Sanders and trumpeter Max Kaminsky aside.

In his discussion of Born to be Blue, Whitehead mentions Bruce Weber’s documentary, Let’s Get Lost (1988), which he clearly disdained. Well, I’d like to know more about that.

In fact, here’s hoping that Whitehead’s next book shines a light on the many documentaries that have been made about jazz over the years. From Ken Burns’s 10-episode Jazz epic to Bridget Berman’s profiles of Bix Beiderbecke and Artie Shaw to Woody Allen’s Wild Man Blues and Vince Giordano’s There’s a Future in the Past, there’s no shortage of deserving docs, and Whitehead undoubtedly has strong feelings about many of them. His readers look forward to his take.