Miss Maybell and her Jazz Age Artistes Bloom Under Lockdown. 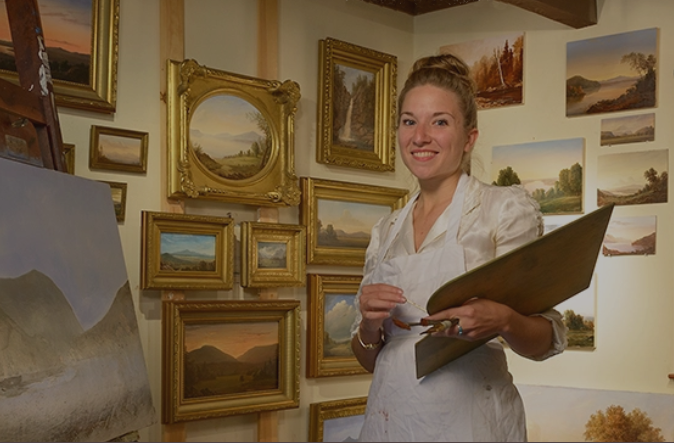 A new, informed, traditional-jazz/blues/ragtime duo is not taking New York’s shutdown sitting down, but they are taking it in their “stride.” Against all odds, they’re ambitiously establishing themselves as serious, specialty-purveyors of Ragtime, Stride, and Early Tin Pan Alley music—that is: performers of pre-swing era vernacular songs, and they are on a trajectory to making art and an artistic career in spite of the pandemic. All of which is evidence of their verve, musicality, authenticity, charm and the unique niche they fill.

Prior to 2018, vocalist/multi-instrumentalist Lauren Sansaricq and pianist Charlie Judkins were unknown to each other. Coincidentally, and independently they were both professional visual artists: Lauren, as a fine-art landscape painter (in the mode of late 19th century painters like Fredrick Church, Albert Bierstadt, and others of the Hudson River School of painting). Charlie was an independent illustrator-animator (very much in the 1930s Max Fleischer cartoon mode). Both, however, had already been actively schooling in music since kindergarten; and although Charlie, by his late teens, was doing occasional paid gigs, music wasn’t necessarily a part of their intended careers.

Yet they were brought together as part of a nascent, informal jazz band (Delta Bound), led by bassist Chisoo Kim for a gig, during which they discovered, in the course of that gig, that they shared a mutual, lifelong passion for pre-1920s popular music and that they had complimentary musical skills. With a wink to the pretentious barrelhouse hoi palloi, thus was born, “Miss Maybell and Her Jazz Age Artistes.”

“Blues, ragtime, and traditional Jazz….those are three things I love best. When I heard Charlie’s playing, I thought ‘this is perfect for what I want to accompany me.’” Then when Charlie handed her his business card and it read, “Ragtime, Blues, Jazz,” it sealed the deal, Lauren said, over a freezing, outdoor, socially-distanced dinner-interview I had with them for this article.

Both are barely hitting their 30s now; neither was brought up by professional musicians but they had strong influences that lead them toward theirs path. While Lauren’s parents aren’t musicians, her Grandmother was an avid amateur singer and piano player, and her mother strongly favors early jazz. Additionally music is in her DNA in that two of her uncles on her father’s side (French-Haitian expats) are musician-music educators; one of whom strongly favors Ragtime.

It was, however, Lauren’s unique Waldorf-Steiner, K-12 schooling—an education that puts a great deal of serious emphasis on art and music, particularly choral singing and music history (Classical to Tin Pan Alley)—that opened the doors of early popular American music to her.

Charlie’s father is a serious early jazz and ragtime record collector-enthusiast. Enveloped in the music, even the Lower East Side restaurant (the Great Jones) where his dad worked was a last bastion for jukebox 45RPMs playing early jazz and ragtime—including Jelly Roll Morton and Scott Joplin! Father and son regularly attended live concerts at the Louis Armstrong House Museum in Corona Queens (NY), and Charlie recalls attending the funeral service of Lionel Hampton. And though his father is not a musician, it’s in his family DNA too, in that his grandfather was a professional accordionist in Sicily. Additionally, like so many of us, the classical, jazz, and ragtime music accompanying early Max Fleischer and Paul Terry cartoons spurred Charlie’s affection for period music and graphics. 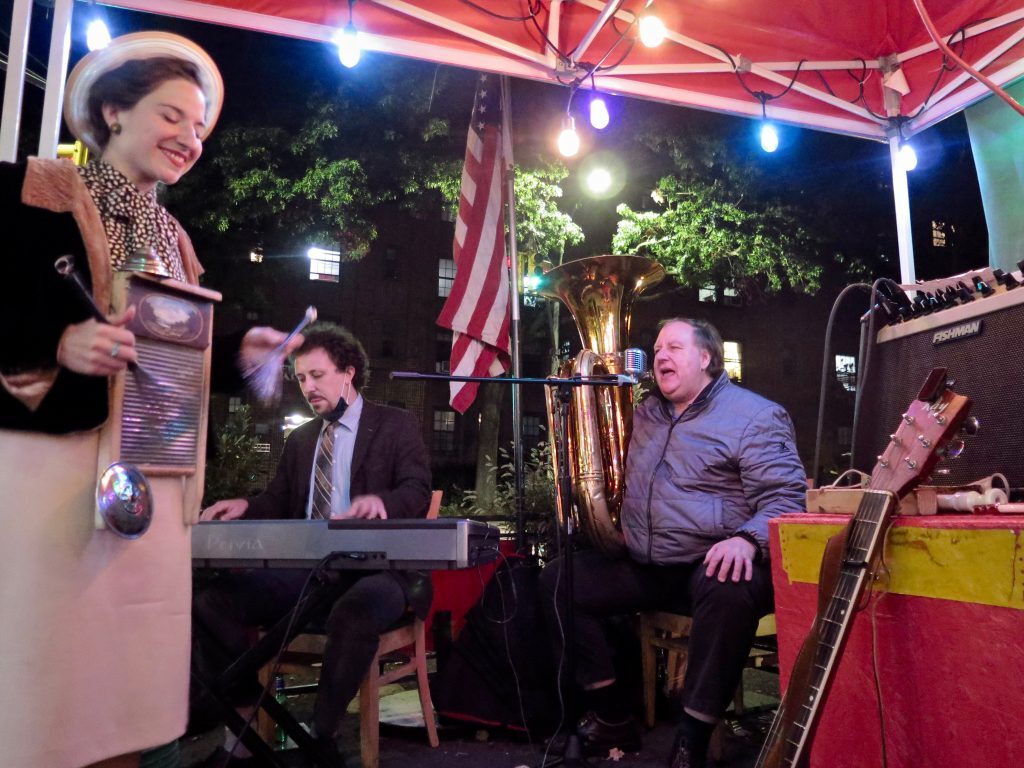 Lauren is, refreshingly, a sweetly mellifluous contralto, surprisingly gutsy, with excellent pitch, a fine underlying sense of rhythm and her phrasing is natural and unaffected. She puts a song across in authentic period style without any sense of imitation or caricature and uses no superfluous modern ornamentation. She takes her influences seriously, for example, for Ragtime from Clarice Vance, and for Jazz from Lee Morse—among many. Furthermore, and not inconsequentially, she plays accompanying guitar, banjo, ukulele, recorder, as well as washboard-lite (meaning not overbearingly) as well as a very eccentric, giant “Bob Burns 1920s Bazooka Kazoo”; none of which, astonishingly, comes across as gimmicky.

Charlie began piano studies at age 5, lured by his mother’s promise that if he learned the piano she’d let him take up his first instrument of choice; the saxophone. But once he was invested into the piano he decided to stay with it. Studies followed in high school with Nate Shaw, and later with George Mesterhauze. Meanwhile he was also honing his ear by listening not only to early jazz recordings but also to the successive generations of early jazz interpreters, such as Turk Murphy, Lu Watters, and Leon Redbone. By age 17, he was booking paid solo gigs in Brooklyn and Manhattan barrooms and accompanying silent films.

Mr. Judkins, however, credits the encouragement he received, (starting at age 16) from Ragtime authority, veteran pianist Terry Waldo and concert stride pianist Ehud Asherie (at a weekly ragtime-stride showcases, held at “Fat Cat”—a Greenwich Village rathskeller/billiard parlor/jazz-dive—where Waldo and Asherie alternately host) as his most formidable hands-on influences, inspiration and training. But he hastens to add that Mr. Asherie also persuaded Charlie to study with Ehud’s own teacher, Jeff Goldstein, to expand his technical skills.

Adding to Lauren’s and Charlie’s combined strength is that their repertory is built largely on obscure songs and verses, happily and skillfully, imbued with life, lilt, and spontaneity to boot. Lauren and Charlie are themselves serious early 78 RPM record collectors (Berliner, Zonophone, Leeds & Catlin, American Record Co blue wax, early Columbias, etc.). They know, and revere, the details about the recordings of the pioneering composers, instrumentalists, vaudevillian singers (the likes of Ada Jones, Dan W. Quinn, and Billy Murray), and lyricists, and familiarize themselves with the nuanced vocal and instrumental differences between versions of given songs sung by the same singers on various “takes” and record labels.

They are no less effusive, however, about the debt they owe to today’s archiving record companies (particularly Archeophone Records and Document Records) as well as the on-line archival projects of the Library of Congress and the University of California at Santa Barbara—all of which underlie the serious intent behind their venture. They are serious to the degree that the couple (as they are “an item”) are so inspired and immersed in the music and its history that they recently took-up residence in an apartment literally overlooking the Queens NY apartment where Bix Beiderbecke last resided and died. They are not casual neophyte-imitators or mere “re-creators”; they are live, in-the-present, studied, vernacular “jazz-age artistes.”

Regarding the era between 1890s and the 1930s, Lauren says, “I’m interested in everything from the time period, the music, the architecture, the lifestyle; I find the history itself very interesting”; and she adds that she envisions many of the songs in terms of their “landscape, imagery and nature.” “I’ve loved these songs for years, getting to do them with Charlie means the world to me” she said; Charlie added that similarly, as a visual artist, he too feels parallels in composition and balance between graphic art and music.

That they’ve managed to get nearly regular paying jobs (supplemented by tips) outdoors at restaurants during this summer’s and fall’s pandemic “shut-down” in New York City has been a minor miracle and it is evidence of their strong, special appeal.

A couple of business advantages they may have for getting gigs is that Charlie plays a uniquely portable 64-key, “Melodigrand” miniature piano (introduced to him by St. Louis piano aficionado, Ethan Leinwand). It allows him to bring an actual acoustic piano instead of a keyboard to gigs. Plus that there can be as few as only two musicians (and an array of instruments Lauren plays) to pay can be economically attractive to venue operators.

Beyond their relatively “busy” live-performance schedule (“busy” by the standards of a moribund industry), additional evidence that they’re onto something special is that they draw the regular participation of other notable professional NY musicians –which frequently allows the band to appear as a trio or a quartet, including likes of reedman Ricky Alexander and banjoist/ guitarists/spoonman/folk-raconteur, Jerron “Blind-Boy” Zeno Paxton. 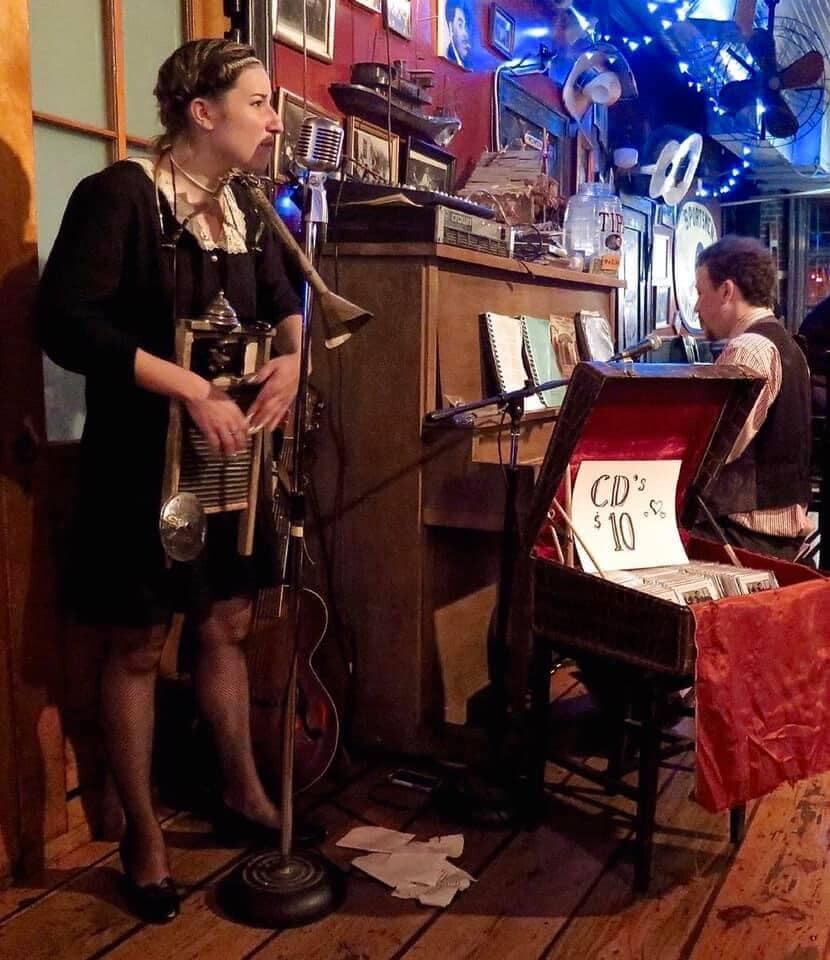 But most notably and routinely (and to great effect) to their credit, however, is that they perform frequently with veteran career bassist-tuba player, singer-harmonist, Brian Nalepka (whose own long list of credits include being a member of Broadway’s Manhattan Rhythm Kings). Mr. Nalepka has also been a shining light as a resources and a third set of ears on the duo’s “music committee.” By Lauren’s own admission, for all practical purposes, Brian is the official third member of “THE TRIO.” When Brian Nalepka is smiling throughout a gig, you can be sure the band is doing something right.

As we move forward into the winter, with outdoor dining and music being further curtailed (but not completely stopped), besides their live gigs they are producing various informal home made videos on their own YouTube channel and they do occasional zoom concerts, as they did recently for The Westchester Library System.

But excitingly the band is putting the finishing touches on a promising new CD, due out in the spring of 2021. The album, their second, will be named Cares Will Be Forever Ended—its title taken from the lyrics to the song, “Oh Me, Oh My, Oh You,” written by Ira Gershwin and Vincent Youmans for the 1921 musical Two Little Girls In Blue.

On their upcoming CD, besides Mr. Judkins playing on a well-tuned 1890 Steinway Grand and Ms. Sansaricq singing and playing her cadre of instruments, they’ll be performing as a mix of trios and quartets that includes: Jackson Lynch on fiddle; Ricky Alexander on reeds; Jarron “Blind-Boy” Zeno Paxton on banjo, harmonica and spoons; and Brian Nalepka on bass, tuba, vocals and the rarely heard tartophone! For added audio authenticity, it was recorded on early electric recording equipment at Brooklyn’s Jalopy Theater, by Big Tone Records and engineered by Jon Atkinson. The CD’s graphics and illustrations will be Mr. Judkins’ and Ms. Sansariqc’s own original collaborative artwork.

Their repertoire is unique and appealing but I asked about the challenges of dealing with racial epithets so often associated with ragtime, minstrel, and early jazz songs; I asked, “Do you modify lyrics?” Yes, they do; to which Lauren added, “There are some songs that don’t even have a racist or derogatory sentiment but there’s one word just dropped in them…” to which Charlie follows up her line of thinking and continues by saying “…it wasn’t so much the song writer’s choice but the marketing at the time.” “We feel that you can take that lyric out and show that it’s a good song with a good spirit,” Lauren insists.

Their musical partnership has been relatively smooth sailing, requiring only occasional pow-wows over matters of tempo or general feel. Originally coming into the project exclusively as a soloist, Charles has had to adapt his playing to more of a balanced role with his vocalist. He has managed to do that without losing the drive required for authoritative ragtime-stride—and while remaining faithful to the accompanying arrangements of the early players, which occasionally even include melody doubling (unthinkable in today’s styling). 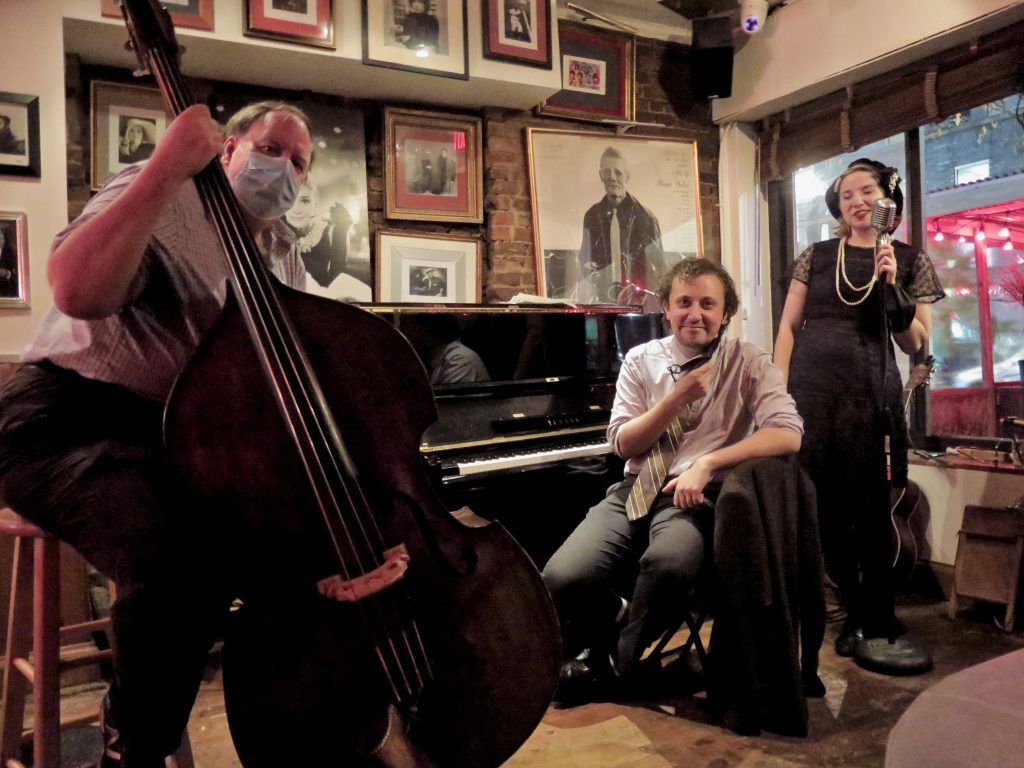 With the exception of the extraordinary and seasoned duo-team of San Francisco’s Craig Ventressco and Meredith Alexrod, I know of no other young team quite as seriously devoted to and capable of authentically bringing to life pre-swing era obscurities. Let it be said that as a niche-within-a-niche, and considering their good, fun, meat-and-potato music-making: if it took a pandemic to cause their ferment, then maybe that’s a silver lining to celebrate.

Their first album was one of our favorite of 2019. read the review here: Miss Maybell & Charlie Judkins The Lingering Blues