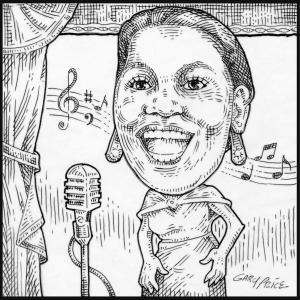 Bessie Smith was born April 15, 1894, in Chattanooga, Tennessee. Her father died shortly after Bessie was born, and her mother, who worked as a laundress to support her six children, died while Bessie was still a child. Her oldest sister, Viola, took over the burden of raising the family.

To ease the family’s poverty, Bessie sang and danced for pennies on the streets of Chattanooga to the accompaniment of her brother Andrew’s guitar. Another brother, Clarence, left home and joined Moses Stokes’ traveling troupe of entertainers.

When Clarence returned to Chattanooga he arranged for Bessie to audition for a place in the Stokes troupe. Despite her considerable vocal talent, she was hired as a dancer; the company already included the formidable singer Gertrude “Ma” Rainey. Rainey mentored Bessie, and helped her develop a stage presence commensurate with her vocal ability.

Bessie Smith developed a solo act as early as 1913, at Atlanta’s “81” Theater. In the next ten years she came to rival her friend Rainey, with success touring as a vocalist on the T.O.B.A. vaudeville circuit, though the “81” remained her home base. After Mamie Smith (no relation) recorded and sold a hundred thousand copies of “Crazy Blues” on Okeh, Bessie auditioned for various record companies including Black Swan, Okeh, and Edison. All proclaimed her sound “too rough.”

In 1923 she was signed by Columbia, where she cut two sides: “Downhearted Blues” (written by Alberta Hunter and Lovie Austin), and Clarence Williams’ “Gulf Coast Blues.” The disc sold upwards of three-quarters of a million copies. Bessie’s contralto voice, far from being too rough, recorded beautifully on Columbia’s acoustic apparatus. With the advent of electrical recording in 1925, the power of her voice on record was even more effective. In those years she recorded with the finest jazz musicians available: Fletcher Henderson, Louis Armstrong, James P. Johnson, Tommy Ladnier, Coleman Hawkins, and many others.

Despite singing about being “down and out,” Bessie Smith was successful enough by 1925 to buy a Pullman railway car for her troupe; her success continued into the 1930s, though somewhat diminished by the effects of the Depression. Bessie Smith died, aged 43, on September 26, 1937, following an automobile accident.
—Andy Senior

Gary Price graduated from the Art Institute of Boston, majoring in Illustration. He worked as the Art Director/Creative Director in the Boston area where his clients including Converse Sneaker, The Boston Museum of Science, Fleet Bank and WHDH Radio.

He founded Price Design in 1976. It continues to serve local and national clients. He has done work for the national children’s magazines Humpty Dumpty, Young World, and Children’s Digest. Gary looks up to the work of Maxfied Parrish & Norman Rockwell .