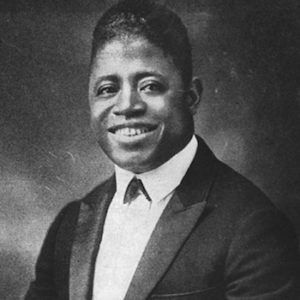 Jazz history books often leave his name out, but Clarence Williams was a major force in the 1920s and ’30s and had quite a career; in fact, several overlapping ones. He was a successful businessman, a decent pianist, a cheerful singer, an enthusiastic jug blower, a bandleader, a publisher, a song plugger, an important songwriter, and the organizer of scores of rewarding and fun recording sessions. Most of all, he was a hustler who never tired of publicizing, selling, and making money off of the music he loved. He had a unique life, particularly for an African-American during the first half of the 20th century.

Clarence Williams was born October 6, 1893 (although some reference books listed the doubtful year of 1898) in Plaquemine, Louisiana. Always attracted to show business, he ran away from home when he was 12 to join Billy Kersands’ Traveling Minstrel Show.

At first he worked at odd jobs for the show including shining shoes, but his enthusiasm, natural salesmanship, and love of music resulted in him becoming a singer, dancer, and master of ceremonies. When he came off the road, he settled in New Orleans and began to learn piano. Soon he was playing regularly in the Storyville district.

Always an eager and talented businessman, Williams kept busy in New Orleans as a talent provider and manager for the local vaudeville theater, dance, halls and saloons. He began writing songs in 1913 when he was 19. When he received a $1,600 check for a song he had forgotten about, “Brownskin, Who You For?” which had been recorded by a band in New York, he began paying close attention to music publishing.

Williams, who toured with W.C. Handy’s group in 1917, also played duos with violinist Armand J. Piron. He and Piron started a music publishing business in New Orleans that was so prosperous that when the time was right, Williams moved up North to set up his own publishing office. After a brief time in Chicago, he permanently relocated to New York.

Williams would soon become one of the most successful African-American music publishers in the country. Among the best-known songs that Williams composed were “Sugar Blues,” “Baby Won’t You Please Come Home,” “Ain’t Nobody’s Business If I Do,” “Shout, Sister, Shout,” “My Bucket’s Got A Hole In It,” “Papa De Da Da,” and a pair that he co-composed with the unrelated Spencer Williams: “Royal Garden Blues” and “I Ain’t Gonna Give Nobody None Of My Jelly Roll.”

In 1921 Clarence Williams married the excellent vocalist Eva Taylor who was able to sing both popular songs of the era and lowdown blues quite effectively in her sweet voice. Her impeccable diction and gentle swing were major assets in selling Williams’ songs. They would be happily married for 44 years.

Clarence Williams made his recording debut in 1921 as a singer including recording two versions of “Brown Skin (Who You For?).” The following year he played piano behind Sara Martin and his wife on a few numbers (including “Baby Won’t You Please Come Home”), but 1923 is when he became an important recording artist.

With the craze for female blues singers hitting its peak (three years after Mamie Smith started it all with her recording of “Crazy Blues”), Williams managed and played piano for Bessie Smith (accompanying her on her first four sessions), at least until a money dispute ended that association. They later made up and he appeared on some of her later recordings.

By then, Clarence Williams was developing an unbeatable system. He wrote songs, published them himself, sold the sheet music, had his wife sing the tunes on the radio and, as a talent scout for Okeh (and a freelancer for other labels) during 1923-28, arranged to have them recorded by some of the finest jazz musicians of the 1920s, sometimes multiple times.

For example, during a six week period in 1927, his “Cushion Foot Stomp” was recorded four times for three labels and with three different singers (including himself). With everything in place, he had perfect outlets for his originals and the songs that he published, making money in several different ways.

Fortunately the music that he recorded was of a consistent high quality and the result is a wealth of rewarding sessions. During 1923-31, Williams recorded 162 selections (not counting alternate takes) under his own name, everything from piano solos to combos and larger bands.

In addition, by 1927 Williams employed a core group with cornetist Ed Allen, Arville Harris on reeds, banjoist Leroy Harris, and Cyrus St. Clair on tuba along with Eva Taylor. Not counted among the 162 selections are sessions under Taylor’s name and similar Williams-led groups issued as by the Barrelhouse Five Orchestra, the Bluegrass Footwarmers, the Dixie Washboard Band, the Four Spades, the Jamaica Jazzers, the Lazy Levee Loungers, and the Seven Gallon Jug Band. Williams also made guest appearances on recordings by James P. Johnson, King Oliver, and George McClennon’s Jazz Devils, and appeared on records by virtually every female classic blues singer of the time other than Ida Cox.

When one considers that Clarence Williams was not a virtuoso pianist (he was always happy to have James P. Johnson or Willie “The Lion” Smith filling in) or an overly talented singer, his accomplishments and productivity are rather remarkable.

If one were to name just a few of the Clarence Williams recordings as particularly essential, the list would have to include Louis Armstrong and Sidney Bechet battling it out on “Cake Walking Babies From Home,” Bechet successfully wrestling the contrabass sarrusophone on “Mandy, Make Up Your Mind,” Coleman Hawkins making a rare appearance on baritone-sax on “Dinah,” a two-clarinet jam during “Candy Lips,” Williams’ vocal on “When I March In April With May,” King Oliver’s playing on “Bozo” and “Bimbo,” the sentimental “Breeze,” Socarras’ historic flute solo on “Shooting The Pistol,” and Williams and James P. Johnson matching verbal and musical wits on “How Could I Be Blue.”

The Depression may have hit in late-1929 and jazz was evolving rapidly, but for a surprisingly long time Clarence Williams was able to keep on going at the same level. He resisted trends by regularly recording with a washboard band during 1929-31 and, while he was off records in 1932 except as a sideman on a few numbers, he returned in full force during 1933-35, leading no less than 22 sessions, all before the rise of the swing era revived the jazz recording scene.

Cornetist Ed Allen, clarinetist Cecil Scott, Cyrus St. Clair on tuba, Floyd Casey (mostly on washboard), and Eva Taylor were regulars in his group with many guest appearances by James P. Johnson, Willie “The Lion” Smith, guitarist-banjoist Ikey Robinson, and clarinetist Albert Nicholas. With most of the top African-American jazz performers of the 1920s either being off records (such as King Oliver and Jelly Roll Morton) or having to modernize their style, one wonders how Williams was able to keep a band that included tuba and washboard going during the 1930s. It must have been the result of being a masterful hustler, constant networking, having a friendly personality, and being able to organize sessions at a low budget.

While he gradually faded away during the Swing era, Clarence Williams was not quite done yet. After making no recordings in 1936, the following year he came back with his washboard-tuba band one final time for a six-song record date. He also made an extensive series of radio transcriptions with a group that utilized cornetist Ed Allen, three reeds, bass, and drums, calling it “Clarence Williams Swing Band,” mostly playing hot jazz versions of spirituals.

Everything else in Clarence Williams’ career was anti-climactic. He led a 1938 session with an organist on which he just took a couple of vocals, and recorded two songs (one apiece as a singer and a pianist) in 1941. Other than a radio broadcast from 1947 that has him playing a few numbers with a quartet that includes Albert Nicholas and Baby Dodds, his playing days were over.

Williams sold his publishing catalog to Decca in 1943 for $50,000. He used the money to buy a bargain used-goods store. After being knocked down by a taxi in 1956, he lost his sight, but he continued on, running the store for another nine years. Clarence Williams died in Queens, New York on November 6, 1965, at the age of 72. In 1970 he was posthumously inducted into the Songwriters Hall Of Fame.

And yes, Clarence Williams III, one of the stars of the Mod Squad during 1968-73, was his grandson.