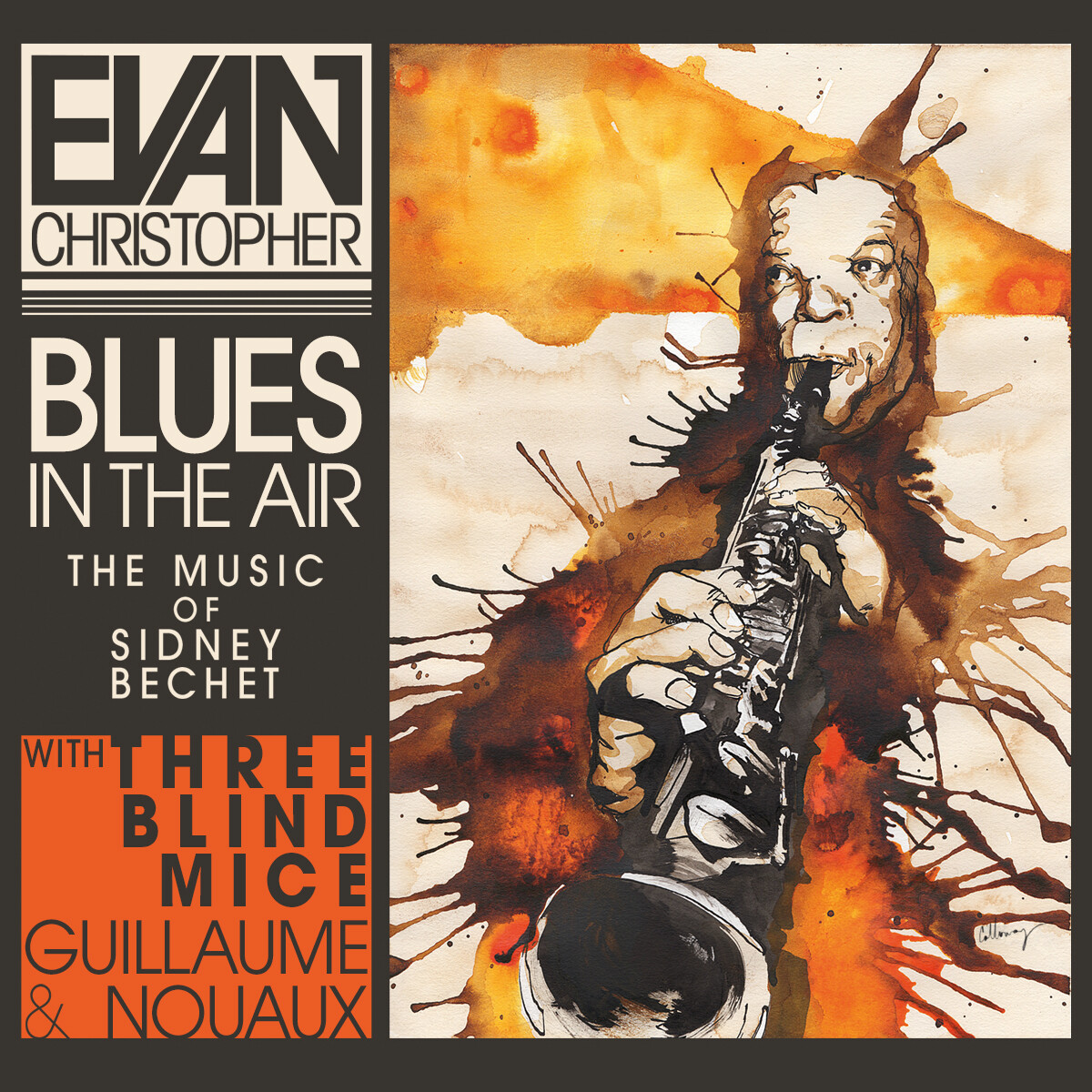 A more impressive lineup could not be asked for. Five of the most technically proficient, creative, and expressive jazzmen working today appear together for the first time on this album. Men who would have been giants even a generation ago. Evan Christopher, as the American, will be most familiar to our readers, and if you closely follow his work you may have heard him on the Django à la Créole albums with bassist Sébastien Girardot. They also met up on the recent A Summit in Paris, which paired Evan Christopher with Gypsy guitar legend Fapy Lafertin. On another effort, Clarinet Road Vol. III: In Sidney’s Footsteps, recorded during Christopher’s post Katrina residency in Paris, he and Girardot are joined by drummer Guillaume Nouaux. Christopher also appears on Nouaux’s The Clarinet Kings.

Though I would not bet money on it, as far as I could learn from my investigations this is the first time Christopher has been joined on an album by either guitarist Félix Hunot or the trumpet player Malo Mazurié, who, with Girardot, make up the Three Blind Mice.

Malo Mazurié has been for several years seen as one of the best trumpet and cornet players alive, particularly in the Bixean tradition. Which is saying a lot for someone who will turn 32 this year. He obviously got an early start, playing in professional environments since the age of ten and since his late teens, touring internationally to festivals. Classically trained, he can play more modern styles of jazz but is most often chooses to play in the style heard here. As a member of Three Blind Mice he has had particular room to shine on three albums I have raved about in this paper.

Guitar takes a special place in the Three Blind Mice line up, and I see Félix Hunot as the person who distinguishes the group from trios with similar instrumentation. His playful interactions with Mazurié, and playful vocals, steer them clear and above the staid technical proficiency they might otherwise fall into and make their output genuinely entertaining. He has appeared as a sideman on a number of recent albums to witch I would offer the moniker, “important,” but they are also thoroughly enjoyable, and his playing is a part of that. They include the David Lukacs led Dream City, Atilla Korb’s Tap Room Swing, and Jérome Etcheberry’s Satchmocracy. I believe the disc at question today will sit proudly on the shelf among them. Around 36 years old, he made his debut as a leader in 2020 with his Jazz Musketeers.

Originally from Australia and long resident in Europe, Sébastien Girardot rounds out the Mice on bass. As top tier bassists often are, he is in demand seemingly everywhere. He appears on the majority of the albums so far referenced here as well as those of Don Vappie, as well as releases with a strictly jazz manouche focus. He also accompanies notables on their visits to the continent, including Cecile McLorin Salvant, Ken Peplowski, Harry Allen, Dan Barrett, and many others. There is a reason so many jazz scenes have that one ubiquitous bassist, when building out a band there is no more critical contributor, and everyone wants the best.

Drummer Guillaume Nouaux’s 2020 album The Stride Piano Kings paired him in duos with seven of the best pianists in our style. While the rhythm and piano combo is one that I am particularly enamored with this album absolutely rose above. As recently as January I recommended it on a radio program, and I was far from the only reviewer who considered it lightning in a bottle, an album that could show anyone what this jazz thing is all about. It sent me exploring his discography, which runs to over 100 albums, with many as a leader. At 45 he is by any measure one of the top classic jazz drummers in the world, he also has a talent for pairing himself with the musicians that can help create his visions.

Which brings us finally to Even Christopher and through him Sidney Bechet. I found a source that, using the quotation marks, referred to his style of clarinet playing as “contemporary early jazz.” The phrase may have originated with the man himself. It is a fitting descriptor of his choice to both stay true to the old masters but embrace the larger stages not always available to traditional jazz musicians. With his Clarinet Road project he makes early jazz cool, while taking his craft seriously, not unlike Bechet. In addition to Bechet, Christopher has studied the other great New Orleans clarinetists Barney Bigard and Omer Simeon. Though he has very recently relocated to New York, New Orleans remains at the root of his playing. He even leads a mentorship program for New Orleans style clarinet.

At 52, Evan Christopher has earned his earned his prominent place in the scene. He moved to New Orleans in ’94, and played with Al Hirt among others, in ’96 he relocated to San Antonio to be the feature clarinetist for Jim Cullum’s band. After three years he returned to New Orleans where he began to come into his own, touring internationally and beginning to record as Clarinet Road. Then Katrina upended everything and set his career in an unexpected direction. He was invited by the French government to stay in Paris, and success emerged from tragedy.

Django à la Créole combined the gypsy jazz of France and the traditional jazz of New Orleans he had been immersed in. The group was an international sensation. Though of the artists on this album only Girardot was part of that group, the connections began to be formed that bless us all these years later with such an all star lineup.

With a lead in like that I hope you are already sold, but maybe I should talk about the album itself, just in case! It consists of eleven titles associated with Bechet. Some are expected, perhaps required, like “Si Tu Vois Ma Mère.” Others dig deeper. “Girl’s Dance” is taken from Bechet’s Ballet, La Nuit Est une Sorcière. The result is a remarkably cinematic arrangement in which each of the quintet conveys the feel of a whole orchestra section. It is unclear who to credit for that arrangement but the dialogue in the liner notes attributes arrangements for other titles variously to Mazurié and Hunot. Mazurié gets credit for a an engaging slow to fast arrangement of “Dans le Rues d’Antibes” that for me was the album high point.

While Christopher makes every effort to “faithfully render” Bechet the album is of this time not Bechet’s, “contemporary, early jazz” at its finest. Aside from “Polka Dot Stomp,” “Lastic,” “Ghost of the Blues,” and parts of “Dans le Rues d’Antibes” the pace is kept contemplatively subdued but those exceptions are spaced perfectly throughout the album to get your heart pumping again. These musicians have a world to draw on—and do. The rhythm section employs subtle variations from West Indian and other sources, led in these efforts by Nouaux as I’ve never heard him before. “Lastic” is particularly spicy. The playing throughout is rich and harmonious, Christopher is not showy but blends in with the whole and his interactions with Mazurié, even on such tried and true pieces as “Si Tu Vois Ma Mère,” played as a waltz, are marvelous. Hunot and Girardot both have stand out solos on “Blues in the Air.”

“Ghost of the Blues” was an excellent theme to go out on. The arrangement is exciting, rich, dense, hot, the perfect closer, giving everyone on stage a goodbye turn as the audience removes their jackets and sits back down to take it in. There are few albums of this caliber. It goes on sale in March. Get yourself a copy.