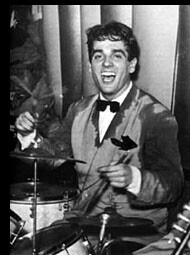 As a teenager in Chicago Gene Krupa (January 15, 1909 – October 16, 1973)was studying drums when he discovered a group of young white jazz musicians playing in a South Side movie theatre. This group is remembered today as the Austin High Gang and included banjoist Eddie Condon, saxophonist Bud Freeman, and drummer Dave Tough. Krupa was very impressed with Tough’s style and started to emulate his playing. He struck up a friendship with Tough and he took him to see King Oliver’s Creole Jazz Band to listen to the band’s drummer Baby Dodds. Dodds became Krupa’s new drum hero.

Krupa started to drum at jam sessions held at a speakeasy called the Three Deuces (across the street from the Chicago Theater), playing with musicians such as Teschemacher, Bix Beiderbecke and Benny Goodman. Soon afterwards Krupa began playing in some of the jazz and commercial dance bands of Chicago including the Benson Orchestra, Thelma Terry and her Playboys, Al Gale, Joe Kayser, and others.

In December of 1927, Red Mckenzie set up a recording session that featured several of the Austin High Gang for the Okeh label. The sessions were issued as Mckenzie’s and Condon’s Chicagoans. Krupa’s drumming was exceptional on these recordings and sounded unique because they were among the first recordings to feature a full drum kit. The common conception among recording engineers at that time was that the bass drum and tom-toms wouldn’t record well, so they are absent from most recording sessions of the 1920s. Krupa also appeared on the other Austin High recording sessions that were issued under the names of the Jungle Kings, Chicago Rhythm Kings and Frank Teschemacher’s Chicagoans. These records have come to be defined as the Chicago jazz sound and the musicians who played on them are often referred to as the Chicagoans.

In 1928 Condon’s Chicagoans headed to New York to back singer Bee Palmer, the shimmy queen. The job fell through, Krupa and the Chicagoans recorded sessions with Red Nichols and Miff Mole. He ended up playing in several of Red Nichols Broadway pit orchestras and playing in commercial dance bands of little Jazz interest until 1934 when record producer John Hammond recruited Krupa for Benny Goodman’s Orchestra that featured the arrangements of Fletcher Henderson.

The national radio broadcasts of Benny Goodman’s Orchestra brought a great deal attention to Krupa’s drumming. By the end of the decade Krupa had become a star. His drum part on Goodman’s 1936 hit “Sing, Sing, Sing” was the classic drum anthem of the Swing Era, and his matinee idol appearance on stage and appearances in films made him one of the biggest musical stars of the era. In 1938 he left Goodman’s group and formed the Gene Krupa Orchestra which featured trumpeter Roy Eldrige and singer Anita O’Day. The band continued to be very popular up until 1943 when Krupa was busted in San Francisco for possession of marijuana. He was sentenced one to six years in prison, but released after eighty days on bail for an appeal. He was able to beat the charges against him eventually because they had been filed improperly, but it caused the break up of his band.

He rejoined Benny Goodman briefly before switching over to Tommy Dorsey’s band. Krupa got his big band back together in 1945 which enjoyed wide popularity until 1951 when he scaled the size of his bands to match the changing styles of Jazz which had shifted from the big bands to smaller Modern Jazz combos. Unlike most of the big name band leaders of the Swing era Krupa was able to change with the music as it became dominated by Bop in the 1950s and 1960s. In 1959 a film called “The Gene Krupa Story”, starring Sal Mineo was released and was a moderate success. In 1960 Krupa had a heart attack and cut down on his performances, going into semi-retirement. In the early 1970s he played in several Goodman’s Orchestra reunion concerts. He died in 1973 of a heart attack while suffering from leukemia.