Whenever some new discovery of historical interest is made, it always fascinates me to think that the newly uncovered thing was really there all along. After the young pharaoh’s death, Tutankhamun’s tomb didn’t blink out of existence for three thousand years; it slept quietly and out of sight as the Great Wall of China was built, as the Roman empire rose and fell, and as Columbus set out for North America. Even as the Original Dixieland Jazz Band made their first records, King Tut’s mummy lay undisturbed and unknown in its dark hidey-hole in the Valley of the Kings. When Howard Carter and his team “discovered” it in 1922, they didn’t conjure it from nothing; rather, they simply exposed a secret that had been there for more than a hundred generations—if only anyone had known where to look.

I got a taste of what Howard Carter must have felt when, in the summer of 2020, I received an e-mail from my friend Dan Levinson telling me of a musical treasure buried deep in the archives of New York Public Library and long forgotten: master tapes of an unissued album celebrating the music of Frank Teschemacher and the Austin High Gang, recorded in 1992 at RCA’s flagship studio in New York under the direction of Dick Hyman and produced by the legendary George Avakian. The list of musicians involved was dizzying: Dick Sudhalter, Kenny Davern, Bob Haggart, Ken Peplowski, Marty Grosz, Dick Hyman, Vince Giordano, Milt Hinton, Howard Alden, Jon-Erik Kellso, Dan Barrett, Peter Ecklund, Arnie Kinsella, Tony DeNicola, and a young Dan Levinson himself (which was how he knew about the tapes). Dan wondered if I might be interested in working with him and the Avakian family to finally release the album through Rivermont. My mind reeled. Was this some kind of late April Fool’s joke or other pandemic prank? These were all musical idols of mine; if they really had assembled to make such a record, why had it never been released? Why had I not heard about it? Like the treasures of Tut, how could something so musically momentous just “disappear” for so long? In the e-mail exchange and phone calls that followed, Dan filled in the details.

The impetus for the session had been a major concert on July 30, 1992, at New York’s 92nd Street Y as part of the “Jazz in July” festival, directed by Dick Hyman. For the prestigious festival, Hyman had his pick of the very best New York-area musicians, and he organized the concert around the Chicago-style jazz of the late 1920s as played by the “Austin High Gang” and their friends: Eddie Condon, Frank Teschemacher, Jimmy McPartland, Bud Freeman, Jess Stacy, Gene Krupa, et al. Back in the 1920s, these budding musicians (many of them students at Chicago’s Austin High School), would go to nightclubs and ballrooms like Friar’s Inn, the Dreamland Ballroom, and the Lincoln Gardens to hear everyone from the New Orleans Rhythm Kings and the Wolverines (with Bix Beiderbecke) to Doc Cook, Freddie Keppard, and King Oliver. Absorbing all they heard, they reinterpreted it with their own youthful, energetic twist. Thanks to a connection with “Red” McKenzie, they found their way to the OKeh’s recording studio where they made a series of records beginning in December 1927 that have since become classics, inspiring generations of jazz musicians who have followed, and providing the basis for the July 30, 1992, “Jazz in July” concert.

The first half of the concert featured a group led by clarinetist Kenny Davern playing tunes of the ’20s without written arrangements, but in the spirit of the early Chicagoans. For the second half, Dick Hyman fronted a group that played his note-for-note transcriptions of original 1927 and 1928 records by the Chicagoans. In the weeks before the concert, George Avakian, one of the most celebrated jazz producers at Columbia, Warner Bros., and RCA, got wind of the goings-on and was invited to a rehearsal session. He was so excited by what he heard that he immediately set about making arrangements to record both the Hyman and Davern bands at an all-day studio session immediately after the concert. And so, following a triumphant concert on the evening of July 30, the musicians reconvened the next morning at the RCA studios at 110 West 44th Street in Midtown Manhattan. In the hours that followed, they produced some wondrous music.

Just prior to the recording session, Avakian had made hasty plans to release the resulting album on Seymour Solomon’s Omega Classics label. (Solomon is probably best remembered for co-founding Vanguard Records in 1950.) But bringing together so many world-class musicians in a state-of-the-art studio with New York’s finest audio engineers came at a steep cost—more, it would seem, than Omega could bear. Soon after the recordings were made, the label backed out, leaving Avakian holding the tapes… and the bill. Without the resources to release the album himself, Avakian shelved the project until he could find a label willing to reimburse his costs. Years went by and no label came forward. There were a couple false starts, but nothing ever seemed to pan out. Avakian grew older. He never forgot about the 1992 “Chicago Jazz” album, but as his health declined, other things took precedence. Eventually he transferred his personal archives to the New York Public Library, and in 2017, Avakian died at the age of 98 without ever having seen the record released.

Several more years would pass until one day, in the summer of 2020 with work at a standstill because of the pandemic, Dick Hyman called Dan Levinson. During their phone visit, Hyman lamented that the 1992 “Chicago Jazz” album had never come out. After their call, Dan got in touch with me, and once permissions were cleared with the New York Public Library and the Avakian family, we started the ball rolling on the album that has now come to be known as One Step to Chicago. Along the way, we enlisted notable New York sound engineer Peter Karl to finish mastering the original analog recordings. Hank O’Neal, of Chiaroscuro Records, and a longtime friend of both Eddie Condon and George Avakian, penned a heartfelt and illuminating introductory piece. Drummer and researcher Hal Smith and guitarist Marty Grosz each contributed essays on Chicago-style jazz. And, for his substantial portion of the accompanying notes, Dan Levinson drew upon the late Dick Sudhalter’s commentary delivered at the July 30 concert to weave together the story of the 1920s Chicagoans with that of the remarkable 1992 session. Avakian, ever the professional, had hired a photographer for the July 31 record date, so it was possible to supplement the writings of Levinson, O’Neal, Smith, and Grosz with dozens of behind-the-scenes photos, giving the reader a true “fly-on-the-wall” perspective of a once-in-a-lifetime all-star recording session.

Of course, what really matters in a project like this is the music, and from the moment I got my first listen to the tapes, I was captivated. When Dan first proposed the project, I was a bit skeptical; “all-star” groups don’t always work. Great as the individual musicians may be, I have heard plenty of festival “all-star jams” where the musicians are genuinely excited to be playing together—and eager to please an audience—but they forget to listen to each other. A dozen different musical personalities clash in a performance that might be exhilarating in the moment, but which wears thin when played repeatedly on a record or CD. What struck me about the One Step to Chicago session is how sympathetically the musicians play together. Oh, there’s plenty of energy, but these fourteen renowned musicians are clearly working with rather than against each other. Whether it’s Dick Hyman’s graceful piano fills stitching together “Nobody’s Sweetheart,” or the way Ken Peplowski bows out of his tenor sax solo with a few punctuating notes from Dan Levinson’s clarinet to make way for Jon-Erik Kellso’s soaring trumpet solo on “China Boy,” it’s thrilling to hear musicians who are so absorbed in the style and each other that they play without ever stepping on each others’ toes. Like championship dancers gliding around the floor in blazes of musical color, they play in a way that sounds completely natural and effortless, but still exhilarating.

Completing the release took nearly two years as we navigated complicated legal hurdles, COVID-related shutdowns at the New York Public Library and elsewhere, and paper and other raw materials shortages that hampered manufacturing of the books, CDs, and vinyl records. But now, on the eve of the 30th anniversary of the remarkable session that produced it, One Step to Chicago is finally seeing the light of day. Whether there are more unreleased full-length albums in the Avakian archives at the NYPL, I couldn’t say. But for now, at least, it provides a fitting bookend to Avakian’s extraordinary 73-year-career as a jazz record producer. 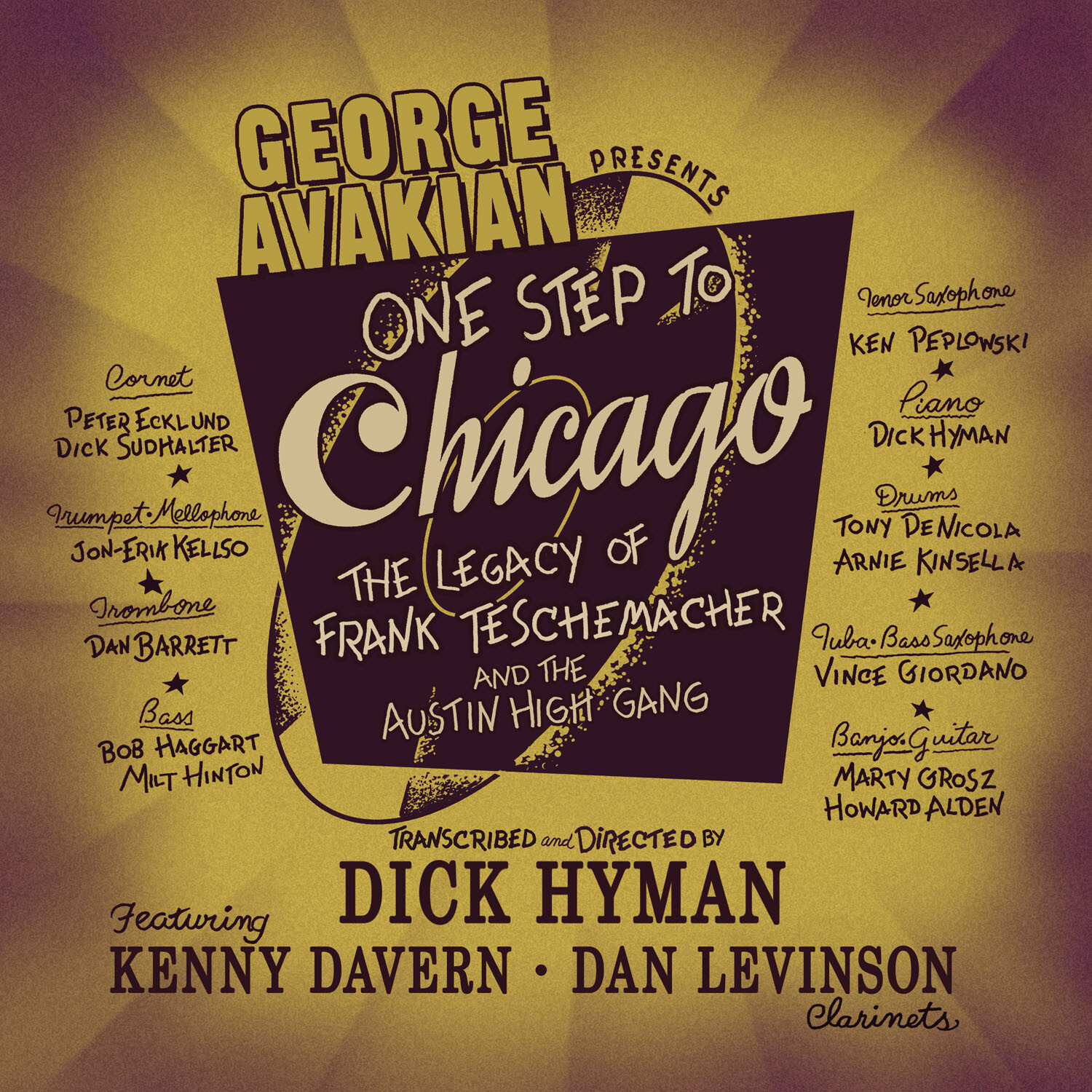 It was 1940 when he produced his (and the world’s) first jazz album: a six-record 78 rpm set titled Decca Presents an Album of Chicago Jazz, featuring then-new recordings by three bands (led by Eddie Condon, Jimmy McPartland, and George Wettling) playing Chicago-style jazz of the late ’20s. In the years that followed, Avakian produced now-classic recordings by artists as diverse as Louis Armstrong, Edith Piaf, and Dave Brubeck, but he kept returning to that exciting Chicago sound: in 1959’s That Toddlin’ Town: Chicago Jazz Revisited (Warner Bros.), and again in 1992 for One Step to Chicago. Since the concept of One Step to Chicago so closely paralleled that of the original 1940 Chicago Jazz album, Dan Levinson and I decided that the cover design of Avakian’s last album should pay homage to his first—and thanks to the remarkable talents of artist Joe Busam, it does. The CD is even packaged in a little hardback book that emulates (in miniature) the look and feel of a 78 rpm album set of the early 1940s. But don’t be fooled: this is an entirely new album!

A century after the “Austin High Gang” came of age, we again find ourselves thrust into some pretty wild and roaring twenties. The 2020s might be missing some of the general optimism that seemed to characterize the 1920s, but the best jazz music of that age remains as vital and ebullient as ever. I’m not one to wallow in nostalgia; despite the many problems of our age, I am still glad to be living today rather than a century ago. Nevertheless, sometimes that much needed “breath of fresh air” can come to us from the most surprising places and times: be it a 3,000-year-old tomb in Egypt, or a 30-year-old reel of tape squirreled away in New York. “Discovering” and working towards One Step to Chicago’s release kept me invigorated during the COVID-19 pandemic; I hope and expect that the album’s exciting and romantic sounds will do the same for all who listen.

Bryan Wright is a pianist, teacher, record producer, collector, composer, and musicologist, specializing in ragtime, early jazz, and related styles. Bryan is the founder of Rivermont Records (rivermontrecords.com) and lives in Pittsburgh, Pennsylvania. Visit him online at www.bryanswright.com.